Doctors do not know definitively what causes Peyronie’s disease, but medical experts think that the two most common things that can lead to this syndrome are:

With either causing factor, the scar tissue from the injury or autoimmune attack can become plaque under the skin of the organ. When the plaque builds up, this scar tissue will pull on the tissue around it, making the organ bend when the man has an erection. With extreme curvature, it can be painful to have an erection. Peyronie’s disease can make it too painful or difficult to engage in sexual intercourse.

The plaque involved with Peyronie’s disease is not cancerous, and It is not the kind of plaque that a person can develop in the arteries and is not a tumor.

The Stages of Peyronie’s Disease

There are two phases of Peyronie’s disease – an acute stage and a chronic stage.

With an extremely mild case of Peyronie’s disease, the condition might eventually go away on its own, but these situations are rare.

You might have an increased likelihood of developing Peyronie’s disease if you:

As researchers learn more about Peyronie’s, they might find additional causes and risk factors.

A man suffering from Peyronie’s disease might experience these complications:

Successful treatments can alleviate these problems. Every man responds differently to therapy for Peyronie’s disease.

The indications of Peyronie’s disease can vary from one man to the next. The signs can range from mild to severe and can develop suddenly or gradually. Often, the pain will eventually lessen, but the curvature remains.

According to Mayo Clinic, there are several Peyronie’s disease treatments, including:

There is also a painless, effective, non-invasive treatment available: GAINSWave® therapy. The 30-minute in-office treatment is attractive with little downtime and effectively no side effects. By using high-frequency, low-intensity sound waves to break down scar tissue, men are achieving relief from Peyronie’s disease.

A HealthGAINS provider can diagnose Peyronie’s disease during an office examination. At HealthGAINS, we help men recover sexual function with our treatments for Peyronie’s disease and erectile dysfunction. You can talk to one of our professional advisers at no charge. Call us today at (305) 682-1818 to get started.

Is There Such a Thing as Too Much Sex?

What defines too much sex? You may have heard the expression “too much of a good thing”. It’s kind of easy to see how that expression can apply to chocolate, or maybe a fine aged Scotch Whiskey. But can it apply to sex? Is there such a thing as having too much sex? A research ...

Eating healthy can be difficult. If we’re not busy at work, we’re busy at home. Who has time to cook a healthy meal when you’re being pulled in so many directions? Once we’re swamped with obligations, following a healthy diet takes a back seat to everything else. Unfortunately, this can lead to nutritional imbalances that ... Do Any Sexual Supplements Actually Work?

How Many Times Should a Man Release Sperm in a Week?

Although there is no specific frequency that is considered most healthy, it is widely believed that frequent ejaculation (2-4 times weekly) can reduce a man’s risk of developing prostate cancer. A study published in the journal of European Urology reported that men who ejaculated more were less likely to be diagnosed with prostate cancer. There ...

Evidence from the International Journal of Impotence Research suggests that VIAGRA® has been shown to help with symptoms relating to Peyronie’s disease. The study concluded that VIAGRA® allowed for 70.8 percent of its participants to successfully engage in sexual intercourse. However, the medication was not able to address one of the major complications of Peyronie’s ...

What Age Does a Man Stop Getting Hard?

A study on aging-related erectile dysfunction in Translational Andrology and Urology found that once a man reaches 40 years old, he has a 40% chance of developing complications relating to erectile dysfunction (ED), and can expect a 10% increase for each decade thereafter. The reason for this elevated risk is due mostly to a decrease ...

According to recent data, a little over half of those over the age of 60 who are healthy enough for sex actually have intercourse at least twice a month. There are many factors that can contribute to a person’s libido as they get older but to get a good sense of what could be contributing ...

What Are the Symptoms of Low T? 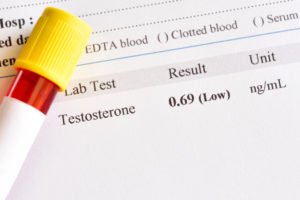 How Long Does Thyroid Hormone Stay in the Body After a Thyroidectomy? What Is the Best Treatment for Low Testosterone?